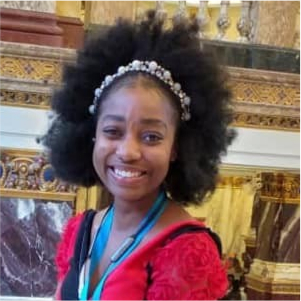 She received several other awards including the famous prestigious Princess Diana Award (2019) and has been included in its “Roll of Honour”. She was nominated for “The legacy Award 2019”. She received the OKP – MA fellowship for Commercial Law at Erasmus University Rotterdam where she currently runs her Masters program in Commercial and Corporate Law. She received the Humanitarian Service Honorary Award for selfless contribution to empowerment of street children in 2018 and the Diamond Honorary Award for youth Empowerment and Leadership also in 2018.

Aside her growing career in the law profession, she is also passionate about performing art and has to her name several awards and recognitions. She is a tribe member of the Theatre Tribe Academy and her recent performances include “Smooth criminal” at Beard wood Theatre, Colfe’s School, London, United Kingdom (2014). She also earned a Certification of achievement in Music, dance and performance of “The Mikado” at the dance Africa stage school, Helen O’Grady Drama Academy, Cape Town, South Africa 2010. She is a major contributor in the production of an international performance “Martin Luther King Jr” at Helen O’Grady Drama Academy, Cape Town, South Africa (2009).  She is the author of the legal thesis “Doctrine of Necessity: Rethinking its Justification for extrajudicial Killings in Nigeria” which was published in (2018). She is a lover of poetry and has to her credit 230 poems with over 20 published and viewed on literary blogs and magazines nationally and internationally.